Your Ability to Play Catch is a Critical Skill 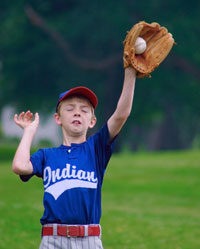 Good defense revolves around a teams ability to throw accurately and catch the baseball. Watch any high school level team or below warm up in the outfield and you'll see players using poor throwing mechanics and running after poorly thrown balls. If playing catch is such a core skill for defense, why aren't players better at it? One of the primary reasons is that many coaches don't teach their players how to throw.

Don't Assume that Playing Catch is a Skill Already Learned

Think your players know how to play catch? That's the assumption of many coaches. In the past when kids were out playing ball in the backyard all the time, kids were more skilled at playing catch. You may have a couple of kids that do that on a regular basis, but if you're like me you have a number of kids that don't touch a baseball between practices. My own two boys are a perfect example as video games and TV normally win out over going outside and playing catch, especially during baseball season when the weather isn't usually the greatest. They'll go out if I go out and play with them, but the hours I used to spend throwing a tennis ball against the house for entertainment has been replaced for them by TV and video games. The result for most coaches is that players are often lacking fundamental skills that many of us expect them to have.

Teaching Kids How To Throw

I hear coaches at all levels complain that they get kids on their teams that don't have the skills necessary to be at that level. Often the blame is placed on the previous coaches for not teaching the fundamentals. While this may be the case, the blame should also be placed on the kids lack of practice at home.

So how should you deal with it?
First, realize it's just something you'll have to deal with each year. You can complain about it and try to hide those kids in positions where they will do the least amount of damage. That would one approach. It's an approach that many coaches take even though they don't realize it. Another approach would be to emphasize the importance of those basic skills and work hard at improving those skills right away. Playing catch is one skill all players can improve on and is essential to the success of your team.

Second, realize that kids will practice at home if you give them specific fun drills to work on in between practices. For younger kids, I try and give them a task where they can count the number of times that they can do a certain skill. I'll send a piece of paper home with each player where they can record their best Since, the goal is to develop a love for the game, make sure the homework is fun.

I'll never forget my first day of fall practice in college. Our coach had us all stretch in the outfield and then before he allowed anyone to touch a ball, he brought us all together and went over throwing fundamentals. It was surprising since I had been throwing all my life and like most of the other guys on the team, I thought I was pretty good at it. I think the real surprise was that I couldn't recall any other coach teaching me how to throw. My throwing accuracy and arm strength increased dramatically that year as a result of practicing how to properly throw the ball.

Every throw needs to be with a purpose. In fact while the kids ages 10 and up are warming up, have on standing on the foul line and have the other steadily scooting back every few throws and distance depends on ages. Every time a kid overthrows his warm up partner, he shall retrieve the over throw and the player whom was over thrown switches places and goes to the foul line. Basically if you over throw you partner you go get the ball and switch places.

THROW WITH PURPOSE AND INTENT!!!!!

Decent little balls for indoor batting practice. Not sure what I expected exactly, but they are basically just stress balls.

I've swung the voodoo one and the Atlas, the ball jumps off the missle 3 better than both of them. Balanced and easy to swing. One of the best bbcor bats out there.

We use these as part of our pre-game warm up to get the kids swinging and their teammates fielding in a safe way. Nice and soft but also durable.
Arrived on time and as advertised.

Ordered this cart to get buckets off the floor. Received it faster than anticipated. Great product, easy to put together, and holds more balls than you can imagine. Will definitely order this product again when needed